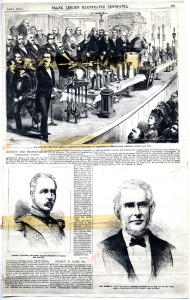 The prospect of undergoing surgery before anesthesia and antiseptics was a horror-filled one for patients. Cutting into the body to alleviate sickness brought the possibility of infection or even death, and promised excruciating pain. Before the widespread understanding that microorganisms such as bacteria caused illness and infection, little care to cleanliness was taken. To operate, doctors wore black, unwashed overcoats stained with blood, pus, and matter from previous surgeries. The coats provided protection for the surgeons from getting a patient’s bodily fluid on their clothes, but no precautions were taken for the sake of the patient. Doctors’ instruments were any range of cleanliness. A patient would be strapped or held down on the operating table by strong men, but, throughout the procedure, surgeons could hear and sometimes feel the patient’s screams and thrashing. Without the ability to “render the patient insensible,” surgeons traditionally administered opium, liquor, or mesmerism (hypnosis) to alter the patient’s mind, rather than alleviate pain in the body. These methods brought their own dangers—either a weak effect or death by overdose. In some cases, a tourniquet or ice was used to numb the area as much as possible. In any case, the patient had to decide how to handle the physical and mental trauma of watching their own operation.

Surgeons, too, were subjected to the horrors of the operating theater. In his book Etherization With Surgical Remarks, Dr. John Warren of Massachusetts General Hospital remarks, “What surgeon is there, who has not felt, while witnessing the distress of long painful operations, a sinking of the heart, to which no habit could render him insensible! What surgeon has not in these times been inspired with a wish to find some means of lessening the sufferings he was obliged to inflict!” (p.1). By the mid-19th Century, speed in the operating room was prized. A leg amputation could be completed in less than three minutes. To the patient who was awake, the physician who could complete a procedure in as little time as possible offered the least amount of suffering. Yet this speed came at the expense of accuracy. Physicians had little time to lend the care of a healing hand. Insufficient anesthetic agents, coupled with the lack of sanitary conditions, made surgery a terrifying prospect. Some patients chose to die from their conditions or commit suicide rather than go under the surgeon’s knife. Nevertheless, surgery as a practice goes back thousands of years.

The history of dental and surgical procedures reaches back to the Neolithic and pre-Classical ages. The first evidence of a surgical procedure is that of trephining, or cutting a small hole in the head. This procedure was practiced as early as 3000 BC and continued through the Middle Ages and even into the Renaissance.  The initial purpose of trephining in ancient cultures is unknown, although some hypothesize it may have been used to rid the body of spirits. The practice was widespread throughout Europe, Africa, and South America. Evidence of healed skulls suggests some patients survived the procedure. Trephining continued in Ancient Egypt as a method of treating migraines. In South America, ancient Mayans practiced dental surgery by filling cavities with precious stones including jadite, turquoise, quartz, and hematite, among others. It is supposed that these procedures were for ritual or religious purposes, rather than health or cosmetic reasons.

Ancient Greeks also performed some surgical procedures including setting broken bones, bloodletting, draining lungs of patients with pneumonia, and amputations. The Greeks had new, iron tools at their disposal, yet the risk of infection or death was still high. Hippocrates’ theory of four humors influenced medicine for hundreds of years. He claimed that the humors (black bile, yellow bile, phlegm, and blood which coincided with the elements earth, fire, water, and air, respectively) exist in the body, and bloodletting (or the draining of blood), among other procedures, balanced them. Ancient Roman physician Galen was heavily influenced by the Greeks. He served for three years as doctor to Roman gladiators and as the Emperor’s surgeon, gaining hands-on surgical experience. Romans continued with trephining, amputations, and eye surgery. Beginning in 900 AD, Al-Zahrawi, a famous Islamic surgeon, wrote books focused on orthopedics, military surgery, and ear, nose, and throat surgery, further influencing Islamic and Western medical practitioners.

The Middle Ages and Renaissance

Surgeons of the middle ages through the 18th century were often barber-surgeons who would travel and perform minor procedures including tooth extraction, bloodletting, and treating war wounds. Rather than studying at universities like physicians, surgeons learned through apprenticeship and observation, as a blacksmith would. Surgery, without adequate anesthetics and antiseptics, remained dangerous and was seen as “a lesser profession.” Some women performed surgical operations until the 1700s when surgical study landed squarely within university training.

Andreas Vesalius, one of the founding fathers of modern surgery and a professor in Padua in the 16th century, completely shifted how human anatomy was understood. Prior to this point, much anatomical knowledge was based on animal dissection—the prevailing method. When dissection of human cadavers was done, physicians observed while servants cut. Vesalius was the first to suggest the hands-on approach of human dissection by physicians and surgeons. His study of human anatomy corrected ideas held from Greek and Roman misconceptions based on dissection of animals. In 1543, he wrote the ground-breaking De Humani Corporis Fabrica Libri Septem, which became the most comprehensive anatomy text at the time and the basis for 200 years of anatomical study.

16th Century French army surgeon Ambrose Paré also greatly influenced the development of surgery. Paré developed an emollient of egg yolk, rose oil, and turpentine for gunshot wounds, which was better than the previous practice of cauterizing (burning shut) wounds with boiling oil. Pare also brought the resurgence of ligating, or tying off, blood vessels during amputation to stop hemorrhage more effectively. While he made strides in the medical field, his motto, “I treated him. God cured him,” reflected the common medical perspective that doctors could only do so much.

While shifts in anatomical knowledge empowered surgeons, many procedures remained out of reach. Physicians could not attempt complex internal surgery or prolonged operations. With the widespread use of anesthesia in the late 1800s, patients no longer had to fear the pain of an operation. However, the threat of infection still meant death for some. In 1865, Joseph Lister, who believed microorganisms could cause disease, developed his method of “listerism.” Lister recommended antisepsis, or the removal of bacteria from instruments, wounds, and the air above the patient. His process consisted of using carbolic acid as a sterilizing agent, but it was cumbersome and many surgeons who did not accept germ theory refused it. By the 20th Century, asepsis, or the prevention of bacteria from entering a wound or sterile environment, gained prominence. Through methods such as boiling, using autoclaves, and chemical antiseptics, sterile operating environments could be achieved. Physicians began wearing white coats, and clean linens dressed beds and operating tables. This final shift allowed for advancements in internal surgery and success in the surgical procedures we see today.